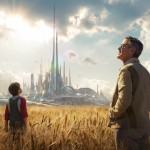 “To say that TOMORROWLAND is a disappointment isn’t really fair. If this reviewer was eight years old, it would seem like one of the best movies ever.” – Daniel Kimmel, NorthShoreMovies

“Brad Bird’s newest has so many worldviews and agendas battling each other in the narrative — some half-baked and some well fleshed out — that the intriguing inspiration behind the concept of TOMORROWLAND gets sunk under instances of preachy blathering.” – Sam Cohen, Under The Gun

“A half-baked lecture in search of a movie to occupy.” – Bob Chipman, MovieBob

“POLTERGEIST isn’t able to provide an honest source of entertainment for audiences in search of some summertime frights.” – Jaskee Hickman, Cinematic Essential

“…if the only reason you’re remaking a movie is simply because you own the rights, it’s probably not worth doing.” – Daniel Kimmel, NorthShoreMovies