Sean Burns reports on Kenneth Lonnergan and MANCHESTER BY THE SEA

Andy Crump reviews BROOKLYN NINE-NINE, KATI KATI and THE BEEKEEPER AND HIS SON

Everything old is new again.

Paul Thomas Anderson’s latest film, THE MASTER – which resurrected 70mm film and the career of Joaquin Phoenix in one masterful swoop – confirmed his position yet again as one of our country’s greatest artists. He’s chronicling our history, using his work to look at the growth of both our culture and our cinema. THE MASTER also confirmed, for better or worse, that he can’t help but make the same film over and over again. BOOGIE NIGHTS, MAGNOLIA, HARD EIGHT – all about troubled, oft-impulsive young men, driven to find love in makeshift families; looking to replace the lack of passion they found in their own (they reach varying degrees of success.) His 4th feature, PUNCH-DRUNK LOVE, fits directly into this category.

Adam Sandler, his star, also seemed disinterested in breaking out of his formula (as of this film’s 2002 release, at least.) HAPPY GILMORE, BILLY MADISON, BIG DADDY, ANGER MANAGEMENT, it’s all the same shit: an angry, violent man-child with an odd task-at-hand (becoming a pro golfer, raising a kid, going through elementary school again; it’s all interchangeable,) falls for an ethereal blonde beauty, uses his newfound strength to conquer a barely-characterized comic villain (Shooter McGavin was always my favorite, for whatever it’s worth,) and eventually, at long last, finds peace through love.

The brilliance of their sole collaboration isn’t in how it breaks away from these formulas. It’s what it does with them. That’s what’s so beautiful about PUNCH-DRUNK. You’ve seen this 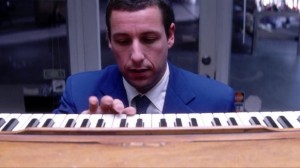 all before, far too many times. You’ve just never seen it quite like this.

Because surely, as Barry Egan, Sandler fulfills his usual clichés: his violent temper is established early, he’s emotionally stunted, he’s tormented by a cartoonish villain (Phillip Seymour Hoffmann, transcendently infuriated, as the manager of a Midwestern phone-sex line/mattress outlet,) he’s obsessively pursuing a wacky hobby (an endless collection of cheap pudding, to be traded for unlimited frequent flyer miles,) and he happens upon the women (Emily Watson) who – with a kiss right out of a fairy tale – can imbue a sense of meaning into all these ailments.

And Anderson, behind the camera, brings everything we’d come to expect of him: an eclectic, mood-defining soundtrack, vibrant set design/color palette, and extensive film references (Egan rocks Jean-Paul Belmondo’s blue suit from A WOMAN IS A WOMAN; after one violent outbreak cuts on his knuckles form the word ‘LOVE’, recalling another famous fist from NIGHT OF THE HUNTER.) It’s all tied together by smooth tracking camerawork, courtesy top-class cinematographer Robert Elswit, which recalls the late-period films of Stanley Kubrick and Max Ophüls.

But PTA also brings something else along, something that’s been sorely (and obviously) missing from all of Sandler’s films. The film has a heart, a soul, and a sense of specificity. He blends interludes of abstract visual art (courtesy the late Jeremy Blake) into the feature, edits it to the beat of a hauntingly erratic score (it feels like a warm-up for the instant-classic scores he’d commission from Johnny Greenwood for THE MASTER and THERE WILL BE BLOOD,) and allows it to operate from a dream-logic almost entirely divorced from our own reality. When Egan sprints to Watson’s apartment, he awkwardly carries along with him the harmonium he discovered (stole?) the morning he met her. What should seem strange, pretentious, and distancing instead feels, for lack of a better term, completely and totally right.

A surrealistic experience, equal parts comforting fantasy and anxiety-driven nightmare, PUNCH-DRUNK transcends its many predecessors with a deceptively simple flourish: it values feelings over mechanics. Its hallucinatory construction never feels the need to adhere to anything other than its own mood. It’s a stunningly beautiful film; cutting past your brain to play directly to your heart. Some love stories are epic, some are sweepingly romantic, but Anderson’s feels nothing less than primal.

His early work mainly recalled Scorsese and Altman, and his last two films Kubrick, but PUNCH-DRUNK is Anderson’s anomaly – a truly singular effort. As a film critic, it’s easy to start thinking you’ve seen it all. And there’s nothing better than being proven wrong. – Jake Mulligan