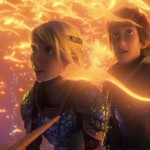 Kilian Melloy reviews HEARTLOCK, THE INVISIBLES, WHO WILL WRITE OUR HISTORY?, OUT ON STAGE: THE SERIES.