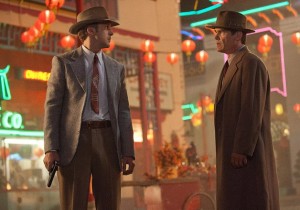 “A quintessential January movie: intermittently amusing but forgettable and overall lifeless, squandering a lot of potential on a series of misses and bad decisions.”  – Bob Chipman, The Escapist

“Emma Stone’s leg looks beautiful peeping out of the slit in the dress she wears, although it’s sad to see her out-acted by her own glorious gam.” – John Black, Boston Event Guide

“This is the worst performance Sean Penn has ever given. And I saw SHANGHAI SURPRISE.” – Sean Burns, Philadelphia Weekly

“You’ll appreciate this movie a lot more if you don’t take it seriously. Judge it with a big old grain of salt and you’ll have fun like I did.” – Evan Crean, Starpulse

“To notice this is to require thinking, something that the makers of GANGSTER SQUAD did not engage in and certainly don’t want members of the audience to attempt either.” – Daniel M. Kimmel, NorthShoreMovies.net

“Hyams’ audacious turns are much appreciated in such a tired, predictable genre. Say what you will, but you don’t see movies like this very often.” – Jake Mulligan, EDGE Boston

“A movie that thinks homophobia is the height of hilarity. That, and the image of Wayans taking a shit – a fitting metaphor for this film.” – Brett Michel, The Boston Phoenix