I’m in love with this combination of coming-of-age stories. Not only do they feature strong female leads coming to terms with their sexuality, but both of the films showing at the Brattle Theatre today are directed by women. It’s a rare empowerment on both sides of the camera.

GOODBYE FIRST LOVE is the more romantic of the two, following the trajectory of one’s first relationship, its passions, and the eventual heartbreak that follows. Camille is a reserved 15-year-old who falls in love with a goofy boy in class who dreams of traveling the world. Well, he sets off to to do so, leaving Camille behind in France with a broken heart. 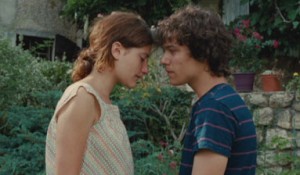 That first feeling of heartbreak is perfectly captured in a single scene: Camille looks devastated lying on the couch, so her mother asks if she’s okay. She responds, “I want to die.” It’s just the right amount of teenage melodrama, and as adults watching, we can both laugh at the naivety yet sympathize with her plight. Chances are, the same end-of-the-world feeling hit us at right about that age.

The movie continues to follow Camille as she moves on with her life. Her character is far from perfect and makes other romance-related missteps. Nonetheless she carries on, pursuing her interest in architecture and living away from the comforts of family. But no matter how independent and mature she becomes, she always remembers her first love. Don’t we all?

Not only is the premise relatable, but it’s beautifully composed in a nostalgic rose-tinted tone. Director Mia Hansen-Løve thoughtfully inserts shades of blue, red, and white (the colors of the French flag) throughout the movie. The colors are subtly incorporated, making the blue-tinted cityscape appear bleaker now that her love has left and the French countryside feel warmer when he vacations with her. Actress Lola Crèton plays Camille with incredible depth, especially impressive since her character is not the type to fly off the handle. Even when she suffers silently, it is more than apparent to the viewer. We cheer for her to get over him, like a friend on the sidelines of a post-breakup mess. But we’re left as helpless as she is in the matter. How could you ever forget your first love?

Following the French film about love is the Norwegian film about sex. Or at least, discovering the tricky situation of needing to hide one’s sexual urges. TURN ME ON, DAMMIT! follows 15-year-old Alma, a high school girl with a slight phone sex addiction and a very serious crush on a guy at school.

Well, word gets out that she has a sexual encounter with said boy, and all schoolyard hell breaks loose when he denies it ever happened. She’s ostracized and teased, with even the neighbor’s little girls calling her “Dick-Alma.” There’s a nice little subplot about escaping the remote village she lives in, but eventually she must deal with her high school scandal.

The spirit of TURN ME ON, DAMMIT! is much more rebellious than that of FIRST LOVE. Alma and her two friends ride the bus to school and flip off their town’s sign. The three girlfriends eventually erupt into a fight over the scandal; realistic in a movie about events getting blown out of proportion. Alma (Helene Bergsholm) has no reservations about saying what’s on her mind, and even goes so far as to profess her love for her crush out in the open (and of course, Mom isn’t thrilled when she finds the phone sex bills – but Alma takes it all with a surly scowl on her face.)

First-time director Jannicke Systad Jacobsen captures the social mess with a touch of absurdity. One of Alma’s friends has a prisoner pen pal. We watch some of Alma’s sexual fantasies, and eventually watch her get interrupted by her mother. It’s almost like a teen sex comedy for girls, set in a bleak (here, even the mountains look desaturated) trap of social isolation.

Although Alma is much more dissatisfied than Camille, both seek independence from their past mistakes. They both look towards a future in the city, the classic bastion of sin. They pursue who they like regardless of the romantic or social peril it may cause, and they’re allowed to explore sexuality in a way not often depicted in American films. These imported treats are a perfect double bill as part of the Brattle’s Recent Raves repertory series. – Monica Castillo