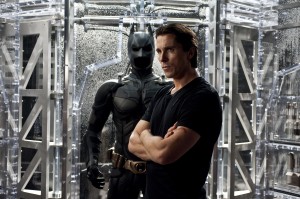 “It goes bigger. It goes bolder. It even goes broader – with what I think might be director Christopher Nolan’s interpretation of what we humans call ‘comedy.’ And yet something about it just doesn’t work.” – Bob Chipman, The Escapist

“Maybe the biggest movie I have ever seen. Not the best, mind you – just the largest, most sprawling, and most comically ambitious. By the time the fifth or sixth act rolled around I learned to stop worrying and love the hugeness.” – Sean Burns, Philadelphia Weekly

“Hathaway is a delight and wonderfully redeems the big-screen portrayal of Catwoman; washing away Halle Berry’s ineptly asinine take on the character from our collective nightmares.” – Tim Estiloz, Boston Movie Examiner

“In its grandiose design and large-scale aspirations, this movie reaches levels not often reached in the superhero genre.  When it finished, I felt like the wind had been knocked out of me.”  – Greg Vellante, The Eagle Tribune

“You had to expect that Christoper Nolan would throw everything he’s got into the final chapter of his bar-setting Batman series. It’s a huge, mixed bag of Nolan-sized ambition, working both for and against the film.” – Norm Schrager, Meet In The Lobby

“This is exciting, dramatic and intelligent filmmaking. Nolan’s Batman trilogy represents the high water mark for costumed hero sagas and one not likely to be matched anytime soon.” – Daniel M. Kimmel, NorthShoreMovies.net

“Nolan, who co-wrote the script with his brother Jonathan, tries to coat the film in a slick sheen of ‘bigger meaning,’ but none of the themes are really fully developed beyond the footnote stage.” – John Black, Boston Event Guide

“It’s as if Nolan has held up a mirror and left enough in the text for either side to interpret it their way, rather than make a more pointed political statement. For such a broad work of pop-art, it’s the perfect approach.” – Jake Mulligan, The Suffolk Voice

“Do you think that Nolan, in his re-envisioning of the Batman universe, has maybe become a little condescending towards it? Does he think that he’s better than the source material?” – Steve Head, The Post-Movie Podcast

“His story gets diluted by focusing on so many characters at once. Batman himself almost seems to take a backseat in his own movie.” – Evan Crean, Reel Recon 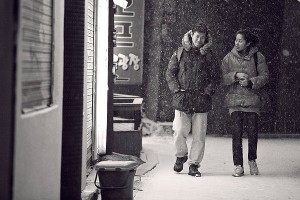 THE DAY HE ARRIVES

“Hong Sang-soo may be copying a template from his earlier movies about flailing directors, but each film is unique, punctuated by occasional zooms that underline the randomness of existence.” – Brett Michel, The Boston Phoenix