“GHOST PROTOCOL has been the definitive feature film that’s been able to deliver at that level more than any other, but that’s changed with FALLOUT forcing its way into the discussion.” - Jaskee Hickman, Cinematic Essential 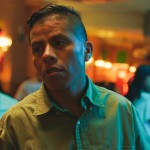