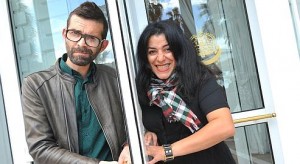 After the critical success of the animated movie PERSEPOLIS, directors Vincent Paronnaud and Marjane Satrapi decided to adapt their next book, CHICKEN WITH PLUMS, in a completely different direction: with live actors. There’s plenty of whimsy and clever storytelling throughout the film, but the theme of the movie is that of losing something that was deeply loved. Think of it as a live-action PERSEPOLIS for grownups, transplanted to 1950s Iran.

The two directors sat down with BOFCA member Monica Castillo to discuss cultural common ground, breaking out of animation, and problems of adapting their books.

Q: How did you decide on your style for CHICKEN WITH PLUMS? You do a very interesting mix of paintings in the background with live action in the foreground with multiple layered effects. How did you plan on using such a wide variety of techniques?

MS: Well, if you have a story that you really want to talk about, and if when you go to pitch your story about a depressed man who decides to die and eight days later he dies, it would seem like the most boring story in the world. It’s really not that exciting. So how do we make that exciting? Not only from the narration but also from the visual style. And there’s something realistic about how we remember things: it’s not always chronological and not all memories appear the same way. Some of them appear full of color and detail; others are completely blank or grey. We wanted to create that and make it exciting visually and narratively, but then how we worked it in was just the result of a lot of work. Cinema is a domain is where we don’t have to limit our imagination, so why should we? But then the big challenge is to make it not look like patchwork. So we should be able to go from one style to the next, and it should feel smooth. So we worked with our cinematographers, set designers, and costume designers to make sure we were all together to make it all one entity.

Q: So speaking about death and to a figure of death is a big part of the movie.

MS: Well of course, we all will speak to death at one point or another. I mean, we live in a society that favors the young, then we get botox to look young, and then we disappear. The reality is that you are young, you are less young, then you are old, and then you die. We are all going to meet death. The fact that we wanted an angel of death that would not be an old man or a skull, we wanted him to have a certain look but could look like a neighbor that would come and visit you.

Q: With PERSEPOLIS, it feels like there’s a bit more of a culture clash: the new school against the old school. CHICKEN AND PLUMS felt a tad more universal in that the main theme seemed to be about loss. Was there a reason behind the jump to explore that in the new character of Nasser?

VP: The reason why we made PERSEPOLIS as an animated movie was to make it universal. We were against a cultural clash, because it does not exist in reality. Cultures are too influenced by each other to really be different. We wanted to explore that in PERSEPOLIS, and we did. By making the whole movie out of drawings, we could get away with an abstract story. But CHICKEN WITH PLUMS is a love story, and that is universal anywhere, so we could just go for it. 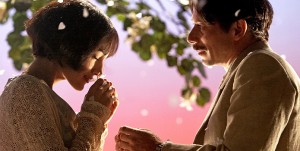 Q: So there’s another story coming next in the series, THE ELEVENTH LAUREATE…

Q: No book this time?

MS: No, because I am sick of the word adaptation. It is very boring. Economically, it is very interesting, but in reality, you have to think about the story in one way and then you have to think about the story cinematically, which is not the same at all. So it is intellectually and artistically not very interesting at all. This next one is going to be a script, not a book. Either I will make a book or make a film, but I won’t make a book to make a film anymore. It’s very boring. Why do that?

Q: How long did you work on CHICKEN WITH PLUMS?

VP: Two years and then another year after shooting. We thought, very naïvely, that after PERSEPOLIS’ Oscar nomination that people would give us money for our next film. But that does not work in the real world, when you make an animated film and don’t want to do another animated film. We had lots of time to prepare the movie.

Q: So this was your first time working with actors. How did that affect your directing?

VP: We had a wish list of our favorite choices and basically, we were lucky that almost all of them said yes. But this is one of the major differences with actors: they’ll put themselves in the story and these are things we can’t control. Our actors are very talented, so they pushed the story further. Even as a director, you become a viewer. You’re watching them react to things in the story and sometimes it was something you were not expecting.

MS: Oh, it happened all the time. For example Maria de Medeiros, who plays Nassar’s wife, we had a small range of emotions for her: just nasty and bitchy. But then we understand her reasons and we feel compassion for her. She made her character sympathetic like that; because we just thought she would be bad. And then you feel really sorry for her, you feel like protecting her, you fall in love with her. That was not in the script at all.

Q: Have you returned to Iran since the success of PERSEPOLIS?

MS: I haven’t gone back in thirteen years. I have no reason to go back now. If I go, I cannot leave. I like my freedom too much.