Screenwriter Lorene Scafaria has toiled in the Hollywood trenches for over a decade, penning eight screenplays before her ninth (a lovely adaptation of NICK AND NORAH’S INFINITE PLAYLIST) was finally produced in 2008. Her directorial debut SEEKING A FRIEND FOR THE END OF THE WORLD takes an even more sideways glance at romantic comedy tropes. Starring Steve Carell and Kiera Knightley, the movie daringly tackles conventional genre expectations while a giant asteroid just so happens to be hurtling towards Earth.

Q: Is it hard trying to end the world on such a small budget?

A:  For sure! When writing it I wanted the scope to stay pretty small, and I never wanted to see the asteroid or the sky or anything like that. At the time I was also thinking:  you can make a movie for what they give you. I just had to sort it out.

Q: So after MELANCHOLIA, TAKE SHELTER and 4:44: LAST DAY ON EARTH, the world seems to be ending in an awful lot of movies lately…

A: Yeah, there have been a lot of end-of-the-world films.  But I saw it more as a backdrop for a romantic comedy… or at least as a relationship movie.  I remember so many from the late 90’s, when like DEEP IMPACT and ARMAGEDDON came out at the exact same 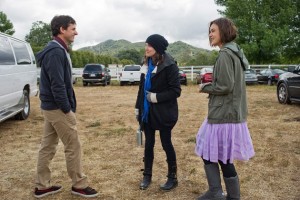 time. The one thing in DEEP IMPACT that got me was Tea Leoni and her father standing on the beach when the big wave is coming, and I cared about them.  I cared about this relationship that was happening. And those movies continued to come out, but during THE DAY AFTER TOMORROW I cared more about Jake Gyellenhaall having a crush on a girl more than his father in the tundra. So I really wanted to explore more what people’s behavior would be like, and how that would be changed.

I moved from New York to LA a week before 9/11. So I was stranded out there knowing nobody and desperate for human contact. I found myself calling up old friends I hadn’t talked to in a long time. It was that feeling of this cataclysmic event, and it changes your own individual behavior and your relationships with people. New York was actually a really friendly place for a while afterwards.  It didn’t last!  But for a little while it felt like a community again. People were looking each other in the eyes. Everybody was equalized by this horrible thing, and we were all in the same boat.  Or the same sinking ship?  Still, there’s something beautiful about humanity coming together like that.

Q: When you were writing was it always Steve Carell in your head? He’s kind of got a monopoly right now on the melancholic goofy guy.

A: There aren’t many comedic actors who can garner that much sympathy. There’s something about Steve that is tragic. On THE OFFICE Michael Scott is this amazing anti-hero who goes from zero to sixty, and yet you can see this pain behind his smile. When I write I never really picture any actor until after the fact, but this character I had always 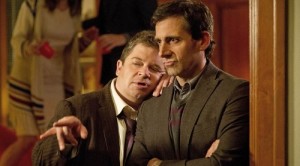 been trying to get out there felt so much like Steve.  I had been wanting to work with him for a really long time, I just never imagined we’d get him.

Q: You’re right. Everyone else now seems to be busy playing stunted man-children.

A: They really are! There are many great comedians, but only so many guys who can fill out a suit. He really is a particular person, and I do think of him as like Jack Lemmon or Peter Sellers – those old comedians who did so much with a look or a word. I suppose he’s been playing a sad-sack for a while, but this character felt more guarded and more internal, so I was happy to see him push that even further. With Steve, I root for his happiness.  And who do you want to see face the end of the world? You want somebody that you want to be happy.

Q: You want him to be happy, but you still killed him?

A: Yeah, I still killed him. The end had to be.

SEEKING A FRIEND FOR THE END OF THE WORLD opens Friday, 6/22 at Boston Common, Fenway and in the suburbs.