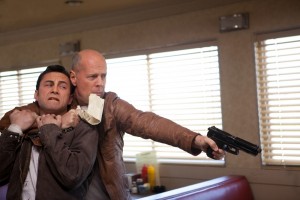 “A neat little movie that leaves you with the nagging feeling it could have been so much more.” – Sean Burns, Philadelphia Weekly
“I’m convinced Rian Johnson has a great film in him somewhere. This just isn’t it.” – Jake Mulligan, EDGE Boston
“It feels like Johnson painted himself into a corner with his time travel story and retrofitted it with this additional gimmick to get himself out.” – Daniel M. Kimmel, NorthShoreMovies.net
“Big, bold, brainy, and ultimately brilliant, this movie doesn’t just have heart. It has soul.” – Greg Vellante, The Eagle Tribune
“Minor annoyances aside, LOOPER is compelling character piece that begs for more viewings.” – Evan Crean, Starpulse
“Thoroughly entertaining and shocking. A couple moments visually, I was like: I’ve never seen that before. Fucked-up and cool.” – Steve Head, The Post-Movie Podcast

“This is one of those feel-good movies that doesn’t necessarily feel good so much as contrived. Like a jigsaw puzzle with jumbo pieces, its every element feels exaggerated and obvious.” – Kilian Melloy, EDGE Boston

“A pernicious utopian fantasy where no child gets left behind, just so long as we finally free ourselves from the shackles of organized labor. Hey, it worked out great for the NFL.” – Sean Burns, Philadelphia Weekly

“The movie preaches about ‘hope’ and ‘yes we can.’ But a slightly different buzzword comes to my mind: bullshit.” – Jake Mulligan, The Boston Phoenix

“A funny and delightful horror spoof. This may be the surprise of the season.” – Daniel M. Kimmel, NorthShoreMovies.net

“A mess. Bascially something to keep your kids entertained for
eighty-something mintues.” – Steve Head, The Post-Movie Podcast

“In this romantic drama, sweet and innocent equals plain and predictable. It’s all as expected as a Sylvester Stallone training sequence in any ROCKY film whose title ends in a number.” – Norm Schrager, Meet In The Lobby

THE PERKS OF BEING A WALLFLOWER

“This sweet coming-of-age story is populated by actors who are slightly older than the characters they’re playing, but that shouldn’t distract you from a universal tale of growing up as an outsider.” – Brett Michel, The Boston Phoenix
“You may laugh. You may shed a tear. You will likely see some part of your life reflected on screen. It is the best film about high school in years.” – Daniel M. Kimmel, NorthShoreMovies.net
“It’s a film that makes you feel warm, especially for those who are wallflowers themselves.” – Greg Vellante, The Eagle Tribune

DIANA VREELAND: THE EYE HAS TO TRAVEL
“It may be enough for people who have already drunk the Kool-Aid and worship at the altar of Diana Vreeland, but it leaves anybody looking for a balanced portrait out in the cold.” – John Black, Boston Event Guide
“Judging from the yarns she spins, that hothouse was a sinfully good place to be a fly on the wall.” – Brett Michel, The Boston Phoenix

“There’s a lot of generic swordplay, some better than generic special effects and some worse than generic dialogue.” – John Black, Boston Event Guide

“Writer-director Michael J. Bassett stages the carnage under so much rain-soaked filth, you can almost smell the stench. It’s a good stench.” – Brett Michel, The Boston Phoenix

“This limp look inside the life of a fifth-rate film producer jumps on the bandwagon of HANGOVER-inspired hijinks. Only it fails to produce any humor.” – Brett Michel, The Boston Phoenix
PITCH PERFECT

“The experience most resembles a simultaneous stabbing of the eyeballs with an icepick to the ears.” – Greg Vellante, The Eagle Tribune
“Jason Moore’s musical doesn’t hit all the high notes, but guilty pleasures are seldom perfect.” – Monica Castillo, The Boston Phoenix
“This high energy mess of a movie makes up for what it lacks in basic competence with goofball exuberance. It’s a slovenly lark, but a spirited one.” – Sean Burns, Philadelphia Weekly
“In terms of characters, pacing, writing, and sheer wit, this is one of the funniest films of the season.” – Daniel M. Kimmel, NorthShoreMovies.net