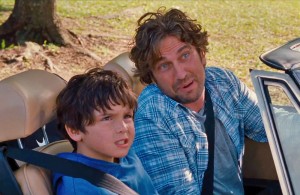 “Don’t worry, there’s a happy ending. But then again, any ending would count as happy as long as it brings this ineffectual fluff to a finish.” – Kilian Melloy, EDGE Boston

“Someone maybe should have told this guy if you want to rekindle a romance with a  woman, you probably shouldn’t start by sleeping with all her friends.” – Sean Burns, Philadelphia Weekly

“Did you ever heat up something in the microwave and miscalculate the time? The edges are nice and hot but as you start eating, you realize it wasn’t cooked all the way through?” – Daniel M. Kimmel, NorthShoreMovies.net

“Fox hasn’t penned a script since 1993’s SO I MARRIED AN AXE MURDERER, and he apparently hasn’t left his home, either.” – Brett Michel, The Boston Phoenix

“The movie drowns most of its endearing factors with ugly moments thriving in the proliferation of heterosexual male fantasy.” – Greg Vellante, The Eagle Tribune

“For something titled THE COMEDY, this movie isn’t funny. Or charming, likable, enjoyable, or any other adjectives you would find splashed on a poster.” – Monica Castillo, Dig Boston