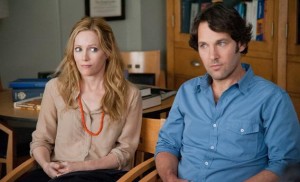 “A narrative mess. A stack of repetitive story blocks hastily piled into a two-hour-plus comedy. But it’s also really funny.” – Norm Schrager, Meet In The Lobby

“There’s an unflinching shrillness to the movie that is admirable in theory but rather off-putting in practice. It’s just sour, and not very funny.” – Sean Burns, Philadelphia Weekly

“The film has a poignant personal touch that is absent from every other mainstream American comedy this year. This generation’s true modern family.” – Greg Vellante, The Eagle Tribune

“More than two hours of increasingly embarrassing ugliness between two people who spew bile at each other with such loathing that you have to wonder how they ever fell in love and got married in the first place.” – John Black, Boston Event Guide

“So depressing and irredeemably unfunny that I couldn’t even finish it. After a certain point I just didn’t care enough to see how the movie ended since all of these people suck so damn much.” – Evan Crean, Reel Recon

“A collection of overgrown children who don’t have a clue what it means to be a responsible adult. This isn’t 40, it’s barely human.” – Daniel M. Kimmel, NorthShoreMovies.net

“The movie isn’t trying for belly laughs or even any comic set-pieces. It just cruises along in second gear being genial.” – Sean Burns, Philadelphia Weekly

“A wonderful alternative worth seeking out as a simple, no-nonsense action thriller that stands on well crafted dialogue and some fun performances.” – Tim Estlioz, Boston Movie Examiner

“What Cruise offers is not brawn but a raw and savage intelligence. A solid and entertaining thriller that relies on logic as much as brute force and fast cars.” – Daniel M. Kimmel, NorthShoreMovies.net

“Oscar-winning French star Marion Cotillard sure is something, isn’t she? This is the work of a great actress.” – Jake Mulligan, EDGE Boston

“Not a traditional love story. Audiard and his magnificent actors give tough-love a good name.” – Kilian Melloy, Kal’s Movie Blog

“You can always try to figure out the special effects they used to take away Cotillard’s legs. That’s more interesting than the story.” – John Black, Boston Event Guide

“A sampler of entrées cannibalized from the Canadian troupe’s 28-year history, akin to the all-you-can-eat buffets found everywhere in Vegas.” – Brett Michel, The Boston Phoenix

“More of a 90-minute infomercial for the various shows the Canadian company has running in Las Vegas than an original movie.” – John Black, Boston Event Guide