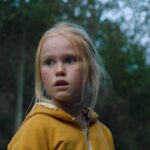 “The writer-director of THE INNOCENTS, Eskil Vogt, makes this film on the heels of his highly regarded script for THE WORST PERSON IN THE WORLD, which was a romantic drama of sorts. The transition in genres for Vogt is easily accomplished, but that’s because, subcutaneously, the issues are similar.” – Randy Steinberg, Blast Magazine