The Brattle Theatre is about to be overwhelmed by eleven of the wildest and weirdest performances of the past twenty-odd years. Nicolas Cage: Greatest American Actor showcases this singular performer at his most boffo bizarre. While researching a recent article in The Improper Bostonian, our own Sean Burns spoke with The Brattle’s Creative Director Ned Hinkle about the series. Here are some highlights from their conversation:

Q: Why Nicolas Cage? Why now?

A: Do you really have to ask? He’s not only a cultural icon, a legit movie star, and a talented actor, but he’s also a magnet for the crazy, the weird, and the wonderful of cinema. ­And he has a sense of humor about it! 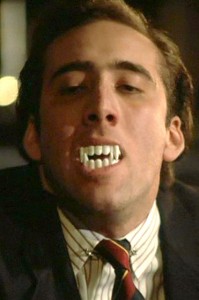 He’s basically a very famous, very handsome super-nerd; which I think is just awesome. It also helps that he’s in two of my favorite films of all time (WILD AT HEART and RAISING ARIZONA) and one of the all-time best guilty pleasures (CON AIR.)  While it’s admittedly facetious to subtitle the series “Greatest American Actor,” I mean it when I say Cage’s range is something to behold and his ability to leave it all on the screen is just amazing. I personally think that his talent is overlooked far too often and that he gets written off as a goofball in some silly movies because he needs a paycheck.

Hell, I like Nicolas Cage so much that I can even forgive him for appearing in that remake of WINGS OF DESIRE…. but only just barely. 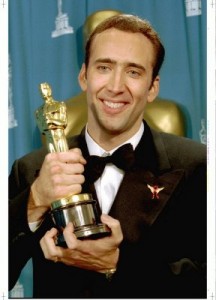 Q: Interesting that you have programmed so many of Cage’s iconic 1990’s roles, and yet not his brief, Oscar-winning window of respectability, LEAVING LAS VEGAS?

A: I’ll put it out there: I am not a fan of LEAVING LAS VEGAS. I’ve never liked it. Probably because I appreciate Cage the best when his roles have a bit of humor to them, and that movie is just so joyless. Aside from that, I wanted to focus mostly on the Cage films that weren’t taken seriously. Or, as I have affectionately dubbed them: “The Crazy Cage Films.”

Q: So is the goal to send audiences home with a deeper, more un-ironic appreciation of this (ahem) National Treasure?

A: I do think that if people can see past the joke that Cage is in danger of permanently becoming they will truly, un-ironically appreciate him as an actor. I mean, the chances he takes are just phenomenal. And no, sometimes they don’t work out. Hello, WICKER MAN! But often they do. In VAMPIRE’S KISS he eats a live cockroach for Chrissakes! It’s easy to say that Cage’s best days are behind him and that he’s his own punch line now, but look at BAD LIEUTENANT. That movie is brilliant, and his performance is what makes it. He’s goofy but scary, unhinged but in control, and not afraid to look ugly. 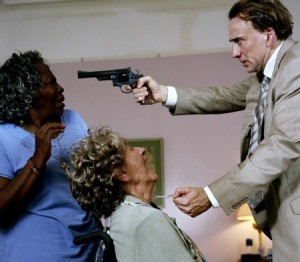