Jesse Hassinger and Mark Anastasio are the programming coordinators at the Coolidge Corner Theatre, one of the Boston area’s premiere movie houses for both first-run and repertory releases. In addition to all the hottest indie fare (they have BEASTS OF THE SOUTHERN WILD, MOONRISE KINGDOM, and TO ROME WITH LOVE on their screens at the moment, among others,) they also program a number of exciting and innovative repertory series. The Science on Screen series pairs expert testimony and conversation with related films, the @fter Midnight series presents cult classics to rabid late night audiences, and the Big Screen Classics Series, screens on Monday nights at 7PM, brings canon classics to the big screen from pristine prints.

And that series is gearing up for one hell of a month. It all starts tonight with Woody Allen’s MANHATTAN, which is certainly his most beautiful film, if not simply his best. (for what it’s worth, it also makes a great double feature with last week’s screening selection, THE APARTMENT.) Coming up later in the month is THE BIG LEBOWSKI, THE WILD BUNCH, and RESERVOIR DOGS – certainly, there is no shortage of American classics at the Coolidge this summer, all in 35mm presentation no less.

BOFCA film reviewer Jake Mulligan spoke with the team about their dedication to film presentation, and about the new directions they hope to chart with their repertory programming. Be sure to check back later in the week for more with Mark and Jesse about their midnight series and other upcoming events.

Question: You’ve spoken before about how you won’t let the studios abandonment of 35mm stop you guys from exhibiting everything you can on film. I was hoping you could speak about how you hope to do that.

Jesse Hassinger: There are collectors and archives around that we have worked with in the past, for genre titles especially. For the midnight series it can be difficult to find prints of things – sometimes we’ve been able to book DVD rights through a studio, then we find a print through a collector so we can play it on film. 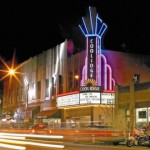 We have a handful of collector’s lists, and we go through those, and we keep abreast of new additions. And there are some great archives around the nation as well, ranging from the Academy of Motion Picture Arts and Sciences Archive in Los Angeles all the way down to University archives that have really interesting arrays of movies. There’s one in North Carolina that we work with, they have a very interesting set of genre films along with classic films – even some 70’s era Hollywood movies.

So if there ever comes a time when the studio will no longer make prints available, or will ditch their prints, or just not make any more, we have avenues to explore.

Question: You also seem to be making some changes to what gets programmed and when – a year ago I would’ve pegged PEE-WEE’S BIG ADVENTURE as more of a Midnight than a Big Screen Classic, but it’s certainly deserving of the latter title.

JH: That’s the whole thing, if you look at the Coolidge Institution and our programming right now. For the last year or two – three, maybe – we’ve been really trying to open our doors for a younger audience. We want to introduce people who are just coming to Boston for college to a great theater like us. We really are trying to get more of these interesting programming choices into our series. Like Ishiro Honda’s GODZILLA, BOOGIE NIGHTS, RESERVOIR DOGS, more 90’s fare.

Mark Anastasio: With a lot of these, the Big Screen Classics, it’s based on the quality of the filmmaker. That was the biggest decision behind BOOGIE NIGHTS – Paul Thomas Anderson, he’s my favorite American filmmaker, I think he’s fantastic. But for years, no one would check into this office when programming prime time series. Things have changed, with new management, it’s become much more democratic, and inclusive. This is the “programming office” – it meant “you guys do the schedule, work on the day-to-day clockwork stuff for this place, and do your little fucking funny series on the weekend.” That was with the previous administration.

Now that things have changed, I get to screen things like THE ROCKETEER….

JH: No prints. That was my #1 with a bullet. I was like “Listen, this is in the canon, we need to screen this.

MA: But we ended up replacing that with RESERVOIR DOGS. Which it’s been 6, 7, maybe even 10 years since we last played that. So that’s not a bad result.