Matt Bondurant’s 2008 bestseller THE WETTEST COUNTY IN THE WORLD was based on a family legend that his family never told him about. This wild historical novel chronicling Prohibition Era moonshine wars in West Virginia’s Franklin County has just been adapted for the big screen by director John Hillcoat and screenwriter Nick Cave as LAWLESS, with Shia LeBeouf starring as the author’s grandfather, Jack.

Bondurant sat down a couple of weeks ago with BOFCA members John Black and Sean Burns. Here are some highlights from their conversation: 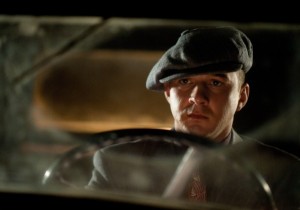 Q: Loved the book. But it’s billed as “a novel based on a true story.”  So how autobiographical –or I guess maybe just biographical– is it, really?

A: Well, there are several incidents that we know to be historically accurate that the book is sort of framed around. There’s not a lot of evidence what any of these guys were doing on any given day from 1920 to 1935, unless they show up in the newspaper. And that happens when they get shot, so that’s kinda all you have.

Q: It was such a closed community, and these guys barely talk to each other.

A: They’re tight-lipped people. We had a vague sense that my grandfather was involved in moonshine growing up, but nobody talked about it. It wasn’t really until about fifteen years ago we found out that he was shot, and that’s when we found the newspaper article. They’re quiet, stoic people. There’s not much of a storytelling urge.

Q: So after all those years working on this book, what does it feel like handing it over to Nick Cave?

A: It’s very impersonal, the transaction. Your agent calls you from L.A. and etcetera, etcetera. Then you sign contracts and it kinda goes away. It’s happening somewhere else and you don’t think anything of it for a long time. And then when Hillcoat becomes attached, then Nick Cave… like a lot of people, I loved THE ROAD but I wasn’t aware of THE PROPOSITION yet. I was of course aware of Nick Cave as a musician, but not as a screenwriter. It was really cool because from the very beginning I felt like I was in good hands, with Hillcoat and Cave as a team? And Shia LeBeouf was attached, so I thought that was great because he has some weight to pull around and maybe he could make things happen. And he did. He stuck with it. Even after people came on and dropped off, and it went into turnaround and Columbia Pictures dropped it. I don’t understand how this stuff works.

Q: We were going to ask you to explain it!

A: Yeah, I have no idea. There were four or five production companies, and somehow somebody picked it up, but really Tom Hardy started the snowball effect when he signed on. All of the sudden everybody else jumped on there too. I think a lot of people wanted to work with Hillcoat and Cave. I saw a couple of iterations of the script, and I thought it was pretty cool. I don’t have much experience looking at scripts. They’re kind of weird to look at. I’m used to novels so it’s a weird sort of framework of a story and it’s all abbreviated and shortened and it seems strange. But I could tell that he had some good lines in there, and he used a lot of my lines, too – so I was really happy about that!

Q: What did you make of that Guy Pearce performance?

A: It’s pretty wild.  That’s probably the most significant change from the book. Hillcoat explained to me that they wanted to demonstrate the difference between Charlie Rakes and everybody else — bringing in an outsider from Chicago and making him more menacing. Of course, as films do, they amped him up and made him a straight villain. In the book I tried to provide a more complicated picture, that he was a person who was troubled by his own personal demons. But you can’t really do that in the film. They’re already trying to get these three brothers down, so the villain’s just gotta be the villain. It’s a crazy sort of look Guy had going on there, and apparently he came up with a lot of that on his own. Hillcoat told me Pearce just came out of the bathroom one day with this shaved line in his head. The eyebrows were gone and they were like, “Holy shit!”

Q: It looks like he’s doing PINK FLOYD: THE WALL.

A: Oh yeah! It was pretty freaky. He chews up the screen. You can’t take your eyes off him.  It seems like the reactions from audiences – they hate him, they want him dead.

Q: So back to the tight-lipped people, what does your family think of the movie?

A: My Dad’s the only living person who is in the film, and he’s that little boy sitting on Shia’s lap at the end. When I was doing this in D.C. last week he came to the screening and saw the film for the first time, then participated in the Q&A, which was pretty cool. 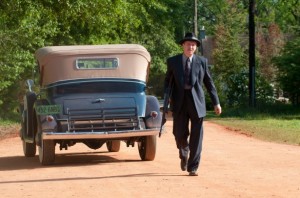