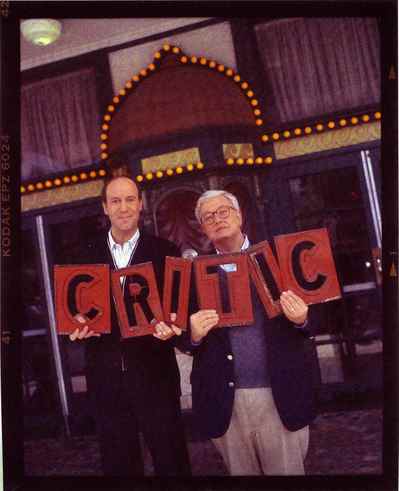 Roger Ebert passed away yesterday afternoon.  We at the Boston Online Film Critics Association wish to pay our respects to the man who influenced us all, was a pioneer of online film criticism, and left an indelible mark in our profession’s history. Thank you, Mr. Ebert.

“It also cannot be overstated how important it was to the Online Critic community that Ebert was one of the first to take the medium and its early stars with any degree of seriousness. When Hollywood and the rest of the critical community was still looking down its nose at us, Roger Ebert was inviting the likes of Harry Knowles to guest on his show.” – Bob Chipman

“I met Roger Ebert in early 1997, at a television programming trade show. At the time, John Sayles’ LONE STAR was being hailed as one of the best films of ’96, and I know Ebert shared my adoration for the film. I really just wanted to chat about the movie, but he and Gene Siskel were on the clock for their show distributor, churning through handshakes and photographs, doing their best to say hello to everyone. We never had that conversation, but somewhere in my files is a corny-looking Polaroid of Mr. Ebert and I with our thumbs raised. ” – Norm Schrager

“What film critic wouldn’t want to cite Roger Ebert as an influence, and even as a role model? The first film critic to win a Pulitzer Prize (thus proving that excellence not only is possible in film criticism, but worth pursuing,) a prolific writer not just of reviews but of essays on the subject of cinema itself, and a pioneer of televised movie criticism. Ebert helped shape the world in which today’s movie buffs dwell, be they cineastes, film savants, or vidiots.” – Kilian Melloy

“Roger Ebert was one of the primary influences for my love and appreciation of film, and the creative process behind it. Ebert, along with his fellow critic Gene Siskel, were part of my childhood via their groundbreaking ‘At The Movies.’ I discovered the ambition to one day combine my passion for film, entertainment, and broadcasting. As a kid, I was fascinated with their often differing opinions on film. Frequently, I found myself realizing I agreed more often with Ebert’s point of view; perhaps subliminally forming the way I look at and enjoy films today. I often felt Ebert was more than an accomplished and knowledgeable critic, but also an average guy who simply enjoyed being entertained by a good story told on film. He was relatable and reliable.  In his final years, he was a man of true courage; determination to ply his craft and indulge his creative passion, despite crushing obstacles, to the very end. Thank you Roger Ebert, and we’ll remember to save you the aisle seat.” – Tim Estiloz

“Roger Ebert was a truly remarkable man, and here I sit devastated but with monumental gratitude towards a man who has genuinely had an impact on my life. The films I’ve seen, the people I’ve met, the education I’ve received, and the love for film that continues to grow and grow would likely all be nonexistent if it weren’t for the kick in the butt that Roger’s writing gave me. I always imagined what I would do if I ever got the chance to meet Roger Ebert, face to face. Years ago I decided that I would simply shake his hand and say ‘Thank you.’ And while the former will never happen now, the thanks I have will forever remain.” – Greg Vellante

“I’ll sum it up with the quote I have at the top of DVD a Day: ‘The purpose of a movie critic is to encourage good films and discourage bad ones.’- Roger Ebert.” – John Black

“While I certainly read many of the greats over the decades, I can say without hesitation that Roger was the biggest influence on my film criticism (why I don’t suffer chronic hemorrhoids from the countless hours I spent on the throne devouring collected volumes of his reviews is a mystery best left unsolved,) and an inspiring father figure as a writer. Cancer may have robbed him of his physical voice a few years back (oh how I miss his television programs — and Gene Siskel), but his lucid, written words were never stronger. In addition to his criticism, he truly embraced the Internet, and the new modes of communication and interactions with his readership that the web made possible. With his blog (and — gasp! — Twitter), he was able to wax eloquently on topics he was just as passionate and knowledgeable about as film, and he could do it faster — and better — than any of us. Damn him. I’ll leave you with but one wonderful example, one that does a far better job of what I’m fumbling to communicate here. Thank you, Roger. For everything.” – Brett Michel

“It’s difficult to come to terms with the loss of a pillar in a community. For cinephiles and critics, Ebert was such a pillar, one they could rally around or against.” – Monica Castillo

“Even if a film critic doesn’t believe that Roger Ebert has had an impact on his or her style of writing and approach to criticism, he has. That’s the kind of critic he was. Whether you acknowledge him as a direct influence or simply as a valuable font of knowledge in the over-arching world of film criticism, Roger was one of a kind, and the effect he’s had on film criticism as a discipline has been felt by everyone and anyone who has thought to articulate their thoughts on the movies in written form. The world is a poorer place without him.” – Andrew Crump

“I’m stunned. I lived in Lincoln Park for 6 years or so, couple blocks north of his house. Used to see him around a bit and say hi, especially at the Apple Supermarket on Clark St. (buying cookies, of course.) Saw a screening of THE ABYSS with Ebert sitting behind me at McClurg Court, which doesn’t exist any more, but at the time was the theater to see such a film, and it was close to their studio. I thought that alone was pretty cool.” – Steve Head

“I didn’t decide to join the film criticism game until a couple of years ago, so admittedly I didn’t take in a lot of Roger Ebert’s work growing up. However, I have tremendous respect for how prolific he was and how passionate Mr. Ebert was about his craft until the very end. His influence and his intelligence cannot be overstated. The high caliber of his writing and his tireless work ethic is something we should all aspire to. I’m inspired by his example.” – Evan Crean

“There are many things we admired about Roger Ebert, particularly as he moved into blogging and revealed himself to be a terrific, thoughtful human being beyond the brilliance of his criticism. There are two features of Ebert’s writing that I took away specifically from him more than anyone else. First was his economy of language. Rarely did he say more than was necessary to communicate his point, which is particularly impressive when you consider the sheer volume of his work. The second was his ability to recognize a film’s internal logic and politics while reflecting them against his own without being didactic or reductionist, viewing their validity as aspects of the film as worthy of consideration as the writing or acting, but treating them fairly even when he completely disagreed. Nobody did this as effectively as he did, and I’ll miss his positive influence.” – Kristofer Jenson

“’The balcony is closed,’ he and Gene used to say at the end of every episode. But it isn’t. Roger Ebert made sure it’s open to all of us.” – Sean Burns