“HONEST THIEF hits (pun) close to home, being set in Boston, but clearly the makers never saw Seth Meyer’s late-night parody Boston Accent, a spoof about movies that feature, more than anything else, someone with a Boston brogue.” – Randy Steinberg, Blast Magazine 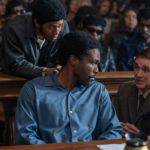 THE TRIAL OF THE CHICAGO 7

“Though the film is sometimes stiffly directed, riding roughshod over tone and pace, and occasionally losing its narrative thread, it is a linguistic tour de force propelled by Sorkin’s gift of gab and a dazzling cast…” – Joyce Kulhawik, Joyce’s Choices