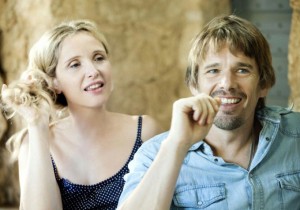 “A movie about compromise and negotiation. The previous two pictures were preoccupied with romantic ideals, but this is the real love story. So funny and so wise, it’s about how happily ever after is harder than it looks.” – Sean Burns, Philadelphia Weekly

“It’s about time bearing down on you, and the impossibility of anything remaining perfect. It’s about a couple characters from a romantic comedy series who are suddenly burdened with all the flaws and tragedies of real life.” – Jake Mulligan, EDGE Boston

“All the longing of BEFORE SUNSET has been replaced with consequences and resentment. How much you enjoy it will depend how you see it—as a couple near the end, or one fighting for survival.” – David Riedel, Santa Fe Reporter 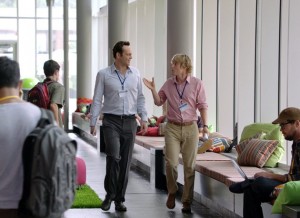 “Smacks of the same sort of lean and merciless energy that has become a cliché of corporate culture, and it’s hard to shake a sense that we’re being simultaneously patronized and shaken down.” – KIlian Melloy, EDGE Boston

“To call this an infomercial for Google would besmirch the good name of infomercials. Even beyond the uninspired premise and the borderline offensive corporate cheerleading, THE INTERNSHIP simply isn’t funny.” – Bob Chipman, The Escapist 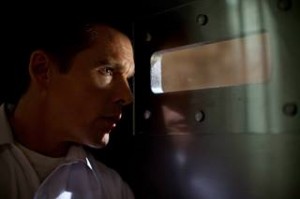 “Takes one of the most fertile pitches I’ve heard in years and uses it as an excuse to make a slasher movie where they don’t have to bother coming up with a reason why nobody calls the cops. A huge, cowardly cop-out” – Bob Chipman, The Escapist

“It’s an allegorical horror story that will provide plenty of thrills and chills, but might also leave you with something to think about afterwards. Considering how much in this genre is disposable, that’s saying a lot.” – Daniel M. Kimmel, North Shore Movies

THE KINGS OF SUMMER

“A re-heated bag of Instant-Teen-Movie. The tired tropes have again been stirred up and served up. It may taste sweet, but it’s artificial. It goes down easy, even if it never feels like a real meal.” – Jake Mulligan, EDGE Boston

“This is a slick piece of work that juts out at just enough odd angles to be idiosyncratic, but never alienating. It’s an amusing. low-stakes debut with modest aspirations that are, for the most part, achieved.” – Sean Burns, The Improper Bostonian

“Every single plot element here plays in the most expected way possible. You won’t be completely bored even while you experience deja vu, but it doesn’t have an original or intelligent thought in its musclebound body.” – Andrew Crump, Go See Talk

WISH YOU WERE HERE

“Consistently arresting. It’s a peek at the power of heavy consequences, an amped-up version of that dreary feeling you get after vacation. And it makes a hell of a good cinematic summer break.” – Norm Schrager, Film Racket