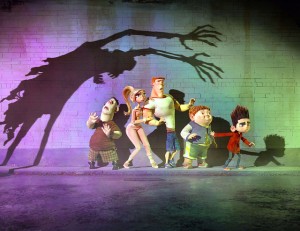 “I think this might actually be my favorite movie I have seen this year.” – Bob Chipman, The Escapist

“Any misgivings about the plot are eased by the handcrafted visuals. Catch it in 3D if you can.” – Brett Michel, The Boston Phoenix

“It’s sort of like what THE GOONIES might’ve been, had THE GOONIES been beautifully animated and not terrible.” – Sean Burns, The Improper Bostonian

“Funny, engaging, and creatively animated. This is one you might enjoy even without any kids in tow.” – Daniel M. Kimmel, NorthShoreMovies.net

“It’s very funny, the pacing is good. I really don’t know where to fault it.” – Steve Head, The Post-Movie Podcast
“Perfect for the family – perfect for anyone, really – it’s a spooky, fun, lucid dream that I cannot wait to visit again.” – Greg Vellante, The Eagle Tribune

“A lot of us were looking forward to seeing this movie, but they made the excecutive decison not to show it to critics in Boston. From what I’ve heard, it was shown in other cities. Can’t say why?” – Monica Castillo, The Post-Movie Podcast

“This one’s still a B-movie, but it doesn’t have the same anarchic spirit. You can only trade your wares on a novelty premise for so long.” – Jake Mulligan, The Suffolk Voice

“Of course it’s garbage. But this is my favorite kind of garbage.” – Sean Burns, Philadelphia Weekly

“This boring, bloated waste of celluloid hit theatres with all the excitement of a rotten gourd hitting a brick wall.” – Bob Chipman, The Escapist

“Not a remarkable film, but it is highly entertaining fluff and mild melodrama bolstered by some great nostalgic music and style of the late 60’s.” – Tim Estiloz, Boston Movie Examiner

“It’s a vehicle rather than a statement, providing a fitting eulogy for Houston and a solid launching pad for Sparks.” – Daniel M. Kimmel, NorthShoreMovies.net

“The melodramatic turns stray into camp, and newcomer Jordin Sparks doesn’t have the finesse to avoid it. Nor does the sloppy camerawork, stilted acting, and bad lip-syncing help the cause.” – Monica Castillo, The Boston Phoenix

“While the story leads to unexpected places, there’s a heavy dose of gender cliché that clings to the movie like a push-up bra.”  – Kilian Melloy, EDGE Boston

“With such erratic construction, the scant 91-minute runtime feels like it goes on forever.” – Jake Mulligan, The Boston Phoenix

“Because we see so many romantic comedies, we project what we think is going to happen. And it never followed that route. I’d think it was going to go right and it would go left.” – John Black, The Post-Movie Podcast

THE ODD LIFE OF TIMOTHY GREEN

“If you relax and take the ride, you’ll walk away believing something special happened.” – John Black, Boston Event Guide

“A very odd film indeed… a fantasy that can touch your heart if you let it.” – Daniel M. Kimmel, NorthShoreMovies.net

“If you allow yourself to simply give in to the sweetness of the story, you’ll end with a smile on your face and a warm feeling.” – Tim Estiloz, Boston Movie Examiner