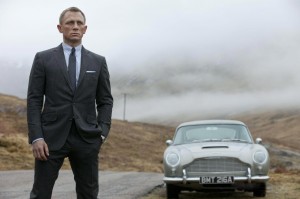 “SKYFALL rocks. The action is spectacular, the humor as sharp as the creases in Bond’s well-tailored suits, the script is tight and the acting – yes the acting – is spot on.” – John Black, Boston Event Guide

“So of course SKYFALL has to go and fucking blow it by explaining everything. Yes, this is exactly what we needed: expository monologues about James Bond’s sad childhood.” – Sean Burns, Philadelphia Weekly

“For those who are willing to go beyond the babes and thrills to question what a ‘James Bond’ means in the 21st century, SKYFALL asks some interesting and difficult questions.” – Daniel M. Kimmel, NorthShoreMovies.net

“If you’re a James Bond fan who feels like the new movies were shipped with a few of the pieces missing, SKYFALL is the movie you’ve been waiting for.” – Bob Chipman, The Escapist

“Cinephiles will appreciate its high quality aesthetics, but Bond fans may be a bit let down by the weak villain, fewer action scenes, and lack of crazy gadgets.” – Evan Crean, Starpulse

“Whatever. Turns out James Bond is the British Batman, or perhaps Batman was an American James Bond? I can’t wait until the British Joker shows up in the next movie.” – Monica Castillo, Bitch Magazine

“Remarkable. Tasked with dramatizing some of the most significant moments of the 19th century, Spielberg shoots the picture as a bustling ensemble comedy.” – Sean Burns, The Improper Bostonian

“Day-Lewis’ fine work is stuck in the middle of a plodding, ponderous and preachy Steven Spielberg film that feels like it lasts longer than the actual war did.” – John Black, Boston Event Guide

“There hasn’t been a film that found so much humor and even heroism in acts of subterfuge and misdirection since OCEAN’S ELEVEN, and in a way that’s an appropriate comparison.” – Bob Chipman, The Escapist

“The historically enriched portrayals are infused with the energy of a screwball comedy, with dialogue that flies back and forth with fiery dynamism.” – Greg Vellante, The Eagle Tribune

“More than anything, it’s the humor that separates this portrayal from any others past. Not content to play the president as a hero, Day-Lewis brings him to life as a smooth negotiator, as sly as he is wise.” – Jake Mulligan, Charleston City Paper

“As history it is fascinating and as entertainment it is superb; with a remarkable cast, a tight and sharp script, and a sure hand on the helm.” – Daniel M. Kimmel, NorthShoreMovies.net

“If this film has a trace of greatness about it, that’s probably because of the way Kushner, Spielberg, and Day-Lewis recollect for us the greatness of the man.” – Kilian Melloy, Kal’s Movie Blog

THIS MUST BE THE PLACE

“Linked and displaced as our lives might be, the film suggests they play out at the foot of monumental events and historic triumphs and catastrophes alike.” – Kilian Melloy, EDGE Boston