THE HOBBIT: AN UNEXPECTED JOURNEY 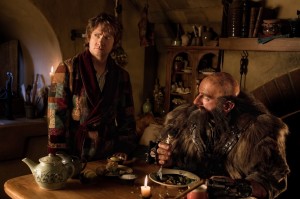 “Much like the book itself, any movie version of THE HOBBIT was going to suffer in comparison to its larger sibling. I loved it. Just don’t go in expecting THE LORD OF THE RINGS because it’s not and it can’t be.” – Bob Chipman, The Escapist

“A bloated, unneccesary cash-grab prequel suffering from a fatal case of elephantitis. The first six chapters of J.R.R. Tolkien’s slender bedtime story are stretched out like silly putty into a 170-minute slog.” – Sean Burns, Philadelphia Weekly

“When the film does jog into action, the camerawork is so frenzied (and looks so much like a video game) that you almost want to shut your eyes to block it all out.” – Kilian Melloy, Kal’s Movie Blog

“One of the most excruciatingly boring movies out this year. If Peter Jackson couldn’t tell this slight story in a single film there’s no hope the other two in this prequel series will be any less bloated.” – Daniel M. Kimmel, NorthShoreMovies.net

“A sluggish trek, a grueling experience, an exhausting ordeal that never seems to end and feels completely satisfied leaving its audience with essentially nothing in terms of story.” – Greg Vellante, The Eagle Tribune

“Stretched paper-thin in terms of narrative and crafted with a much lesser elegance than the RING pictures. It also embodies everything terrible about Hollywood’s house-style franchise filmmaking.” – Jake Mulligan, EDGE Boston

“Jackson does an excellent job with balancing the adult action in the film
with a lighthearted tone which feels appropriate for younger audiences.” – Evan Crean, Starpulse

“Chaotic and dull. The film looks like crap – over-lit and grainy, more like a video game than a movie. It made me want to puke.” – John Black, Boston Event Guide

“A tedious affair about a tedious affair. Taking great pains to remain inoffensive, the movie wears its slightness on its sleeve.” – Sean Burns, The Improper Bostonian

“Less a peek behind the curtains into private, privileged lives than a marble cake of mild titillation and mild historical interest.” – Kilian Melloy, Kal’s Movie Blog