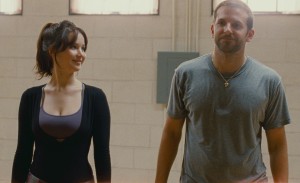 “David O. Russell tries to toe the line between making something personal and making something that feels like it came off a conveyor belt. He ends up on the wrong side.” – Jake Mulligan, EDGE Boston

“Is he serious? Is all it takes to fix a painfully broken man’s mind the love of a woman he just met, a woman he’s mentally and emotionally abused for most of the film?” – John Black, Boston Event Guide

“Pat and Tiffany find emotional healing through the power of love, and although it’s overly optimistic, there’s something really charming about that idea.” – Evan Crean, Starpulse

“Yes, this is a romance between two people with mental problems. We’re supposed to find that endearing because, after all, you know how much fun schizophrenia can be.” – Daniel M. Kimmel, NorthShoreMovies.net

“Glorious. A slow-motion, fifty-thousand clown-car pileup of a disaster that’s funnier than almost any other moviegoing experience I’ve had this year.” – Bob Chipman, The Escapist

“A hilariously funny, wild and camp-strewn romp that manages to tweak the solemnity of the material with a knowing wink at it’s inherent absurdity.” – Tim Estiloz, Boston Movie Examiner

“Of course this series is garbage, but by now it has calcified into winking, self-aware camp that eventually explodes into a craptacular of the highest order.” – Sean Burns, Philadelphia Weekly

“At a key point, coven leader Michael Sheen lets out a spectacular laugh, which nearly drowned out my own.” – Brett Michel, The Boston Phoenix

“As jaw-dropping and audacious as the setting is, Wright is extremely careful to never let it dominate the story or the actors telling it.” – John Black, Boston Event Guide

“You’ll likely find Stoppard’s all-too-literal interpretation of the dressy role-playing of society life to be a cause for slowly mounting aggravation.” – Kilian Melloy, Kal’s Movie Blog

TALES OF THE NIGHT

“The kaleidoscopic backgrounds offer a colorful counterpoint to the simple silhouettes that form the people, animals, and mythical beasts populating the six fables.” – Brett Michel, The Boston Phoenix