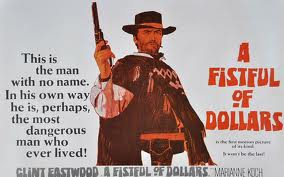 Is there any director from cinema’s past 50 years as influential as Sergio Leone?

It’s impossible to even decide where to begin with the legacy he and his films have left behind. Of course, you could start with the incredibly prolific wave of 70’s Italian genre movies that followed in his wake; slasher films, cop films, supernatural thrillers, and the genre he godfathered – The Spaghetti Western. They are, almost without exception, derived from his wholly unique visual style. And his preference for ‘heroes’ who err on the side of violence and villainy.

Then there is the sheer iconography of his greatest images – from the climactic duel in THE GOOD, THE BAD, AND THE UGLY and De Niro staring blankly into the end of ONCE UPON A TIME IN AMERICA, to his oft-used favorites like sweat-dripping close-ups crosscut with desolate long shots, or the use of the entire Cinemascope frame to photograph nothing more than a man’s eyes. This is to say nothing about the fact that he created one of cinema’s defining antiheroes (if not one of its first) in Clint Eastwood’s Man With No Name, a bounty killer who murdered without hesitation for money and spouted enough one-liners for us to like him while he did it.

We’ve seen a few of these characters since then. 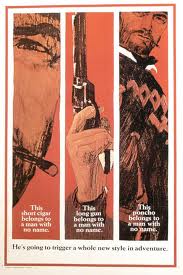 And perhaps most importantly, there is the innumerable amount of modern filmmakers who count him among their influences – and none too subtly. And that list ranges from his spiritual son Quentin Tarantino to master filmmakers like Martin Scorsese to upstart youths like Edgar Wright (SHAUN OF THE DEAD.) So, to put it bluntly, imagining the landscape of modern film without the language and influence of Sergio Leone to guide it is a bit like trying to imagine what the NBA would be like without Michael Jordan.

And with A FISTFUL OF DOLLARS, playing twice today at the Brattle Theatre, you get to see Leone become Leone, as we know him. Ennio Morricone’s musical compositions are as integral to his style as any of his visual flourishes, and the pairing of his music against Leone’s ruthlessly violent images – like Clint Eastwood’s boot stomping into the picture, framed as large as his enemies entire bodies, ready to do battle – is like cinematic love at first sight.

And while opening scenes feel a bit craftsman-like (Leone had worked behind the camera on sword-and-sandals epics) by the film’s climax, his eye has matured enough to capture the shockingly powerful frames of conflict and contrast that have captivated viewers so vehemently for decades.

So let’s get the elephant out of the room. Yes, FISTFUL is a direct remake of Akira Kurosawa’s samurai masterpiece YOJIMBO, yes, much of it is recreated shot-for-shot, and yes, YOJIMBO is probably the better film if you deconstruct the two. And certainly, everything Leone is doing is taken from the playbook of American westerns – say, the Catholic iconography and stark battles between good and evil from Ford, and the slightly-surreal framing from Samuel Fuller’s Cinemascope masterpiece FORTY GUNS (which does, indeed, pioneer the eyeballs-close-up Sergio is always granted credit for.)

But Leone makes the movie his own, his signature is undeniable – and it’s those changes and images that would come to define the artist as we know him. 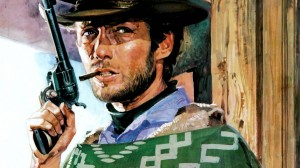 The sense of self-awareness that penetrates throughout all the operatic posturing, making every single second a joy to watch. The sense of deconstructing his chosen genre, the western, then building it back up with nothing more than it’s most essential moments – a hero emerges, a villain conquers, a gunfight – stretched out to unbearably tense lengths. And those beautiful, magnificent zooms – everything that we now know as simply Leone is present here. So, behind the “it’s a remake!” complaints is one of the greatest instances of a filmmaker finding the precise voice he would use to tell stories for the rest of his career.

Like Kubrick with 2001 or Godard with BREATHLESS, it lays out the aesthetic style (both in his visuals and in Morricone’s singular sounds) and thematic concerns that would drive him for the rest of his life with a startling clarity. It’s not just a movie, it’s an artistic mission statement. – Jake Mulligan