BOFCA member Kilian Melloy was one of many critics who did not fall in love with Peter Jackson’s decision to film THE HOBBIT in 48fps. He explains so here, as well as ponders a few potential backlashes the movement can cause: 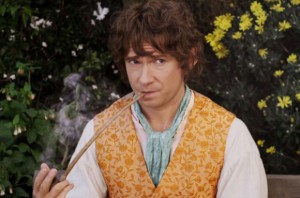 If you’re going to see, or have seen, Peter Jackson’s THE HOBBIT you may be about to experience (or already have) the latest improvement in how movies are made and shown: The speeding up of the filming and projecting rates from 24 to 48 frames per second. Doubling the film speed literally doubles the content of visual information on the screen and gives “The Hobbit” a high definition look that, if it catches on, might spark the net mini-revolution in the medium comparable to the advent of widescreen, IMAX, or the newest 3D technology.

Movies are all about sound and vision. Because of that essential fact, there’s probably never going to be a thoroughgoing reinvention of the medium unless someone comes up with a way to provide cinematic content via hologram or virtual reality. Until then, movies will be based in the same two sensory channels as they have been since the advent of the talkies in 1927. Everything else is a matter of improvement: Multiple channel digital sound, bigger screens, improved 3D, and digital filming and projection (which aren’t as good as emulsion film yet, but it’s only a matter of time).

Jackson’s new 48 frames per second technique delivers images that are startling and, at least initially, unsettling in their crystal clarity. The debate has already started to rage as to whether this experiment is a good idea, and whether it might become a new industry standard. Not everyone is thrilled with the results: This level of visual clarity puts the artifice of film literally right in your face, so that filmmakers need better sets, better makeup, and —— especially —— better CGI in order for the harder surfaces, sharper edges, and more visible details to look convincing. Otherwise, the level of reality is simply too high and props, sets, and costumes look like– well, props, sets, and costumes. Combined with 3D, the 48 FPS “Hobbit” comes across looking like something shot on analog video, with the special visual effects resembling video game graphics. This is, needless to say, a disappointment for a big-budget event movie.

Movies have gotten bigger, faster, often dumber, and generally costlier as studios seek to draw audiences away from other amusements, especially online video games, which consume literally millions of years in man-hours worldwide (It’s no coincidence that movies look more and more like games). Whether 48 FPS becomes a new standard or proves to be a fad, its entrance on the cinematic scene comes, I would suggest, at the expense of eradicating a crucial narrative distance.

Standard film stock and even digital filming provides a tiny amount of fuzz and blur. Emulsion film has varying levels of visible grain. We don’t necessarily notice those things consciously, but unconsciously they are cues that tell us we’re watching a movie and engaging in an experience in which we not true participants. This creates the “narrative distance” I’m talking about —— a slight, but necessary, remove that we bridge by projecting ourselves into the characters’ experiences. Thus we can sympathize with the characters; their adventures, triumphs, and sorrows temporarily become our own. But the effect is only temporary: A film may leave us with lingering emotional sensations the way a dream might, but we’ve never been in danger, or in love, the way the characters have been. All we’ve done is shared the characters’ experiences for a couple of hours.

But the visual varnish of softer textures and film grain is wiped away by digital 48 FPS filming and projection. THE HOBBIT gives us images that look more real, but also more harsh and, in confined sets such as Bilbo Baggin’s underground home, somewhat claustrophobic. That, in turn, can kick us out of the dreamlike state of identification, or imaginative projection into the story, which we engage in as movie viewers. It’s hard to fall into a film that keeps reminding you it’s a film.

That’s a complaint about the technique at its current, nascent state. Those difficulties might well be surmounted, making movies even more immersive than they’ve become in this age of digital IMAX 3D presentation. But here’s a possible knock-on effect of films that become too immersive and too lifelike: If film’s ability to generate and present images grows too precise, less and less suspension of disbelief (and less of that imaginative projection of ourselves into the narrative) will be required of us. At some point, given the ever-more realistic images in which cinema trades, will its artificial world become a more effective simulacrum of reality or a substitute for it?

In the wake of AVATAR and its highly convincing 3D and its cutting edge CGI, the media crackled with reports of viewers becoming so invested in the highly detailed, visually rich, and totally fictional world of Pandora, that returning to their actual lives at the end of the film depressed them. Could the next generation of IMAX / 3D / digital / hi def movies make the cinematic experience routinely mood altering? Could movies become literally addictive?

In her book “Reality is Broken,” Jane McGonical fingered contemporary life as lacking in fundamentally satisfying things like work that rewards us, everyday experience that sustains us, and the ability to fail in a way that’s fun and instructive rather than threatening to our overall success and social standing. Large segments of the global population have retreated from reality’s “broken” state into online communal fantasy realms where they spend as much time doing virtual work, if not more, as they spend at their paying jobs.

With movies and games coming to resemble on another more and more closely (video games now have more complex narrative structure, while movies, liberated from physical constraints on the camera by CGI, are increasingly rapid and airborne), will the final result be some sort of entertainment “singularity?” And will that singularity replace reality for those who can afford it, or those who can’t, but who will get addicted?

It’s hard to imagine, watching the often-unsatisfactory result of THE HOBBIT and its foray into 48 FPS. But our hardware and software grows more sophisticated at an ever-accelerating rate, while the wetware of our brains and nervous systems struggle to adapt. One day soon, our eyes (and production values) may have become so accustomed to 48 FPS that every filmed document that came before will seem unbearably bleary. If so, will we lose the crucial narrative distance that has defined the experience of cinema so far, so that movies lose their longstanding power to enchant? Or will we head to the opposite extreme, and lose ourselves more completely than ever in the calculated artificial dreams of the movies? Will we, to some extent, lose our ability to dwell in the real world?