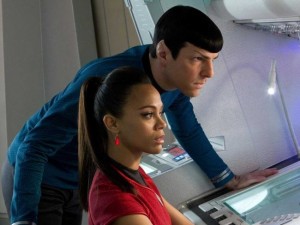 “Open Letter To Paramount: The cowards and cretins in your publicity department have made a lot of critics angry, ensuring that whatever negative reviews the film gets will be even nastier than they might have been. Fire these idiots.” – Daniel M. Kimmel, North Shore Movies

“As glum and mechanical as its predecessor was buoyant. The muddiest-looking movie you’ll find in theaters right now, this sorry sequel feels rote and hopelessly derivative, timidly going where we all have already been before.” – Sean Burns, Metro

“It’s reckless fan service. No more, no less. The film goes out of its way to undermine its own stakes and drama at every opportunity by turning incidents into mild inconveniences. Nothing bad that happens here matters.” – Andrew Crump, Go See Talk

“A big handful of clunky, messy nothing. It’s a sloppy, poorly constructed sequel with no clear sense of identity or direction, relying too often on references and callbacks to a series legacy it neither respects nor understands.” – Bob Chipman, The Escapist

“J.J. Abrams needs to confront his addiction to fake zooms, lens flares and shaky cam. The second installation of this rebooted franchise delivered half the suspense of the first one and almost forgot its bad guy for half an hour.” – Monica Castillo, Dig Boston

“There’s nary a dull moment nor a dry eye throughout the film. It’s a creative and emotional effort, quite a collaborative feat. I wanted to tell Sarah Polley that it’s okay to share stories. That’s what the movies are for.” – Monica Castillo, Dig Boston

“The subtext outweighs the text, dragging the whole thing down into conceptual gobbledygook and leaving it feeling less like a personal, needed-to-get-it-out-there document than a well-financed Grad School project.” – Jake Mulligan, EDGE Boston

“Yes, the subject matter is generally self-involved, but Polley’s curiosity, investigation and filmmaking technique add a layer of complexity that’s worth attention. She treats reality—her dad’s, her mom’s, her own—in fascinating ways.” – Norm Schrager, Meet In The Lobby

“The film stops dead in its tracks so every on-camera participant can muse, at not inconsiderable length, about what exactly they are trying to say here. Polley goes from directing a movie to defending her dissertation.” – Sean Burns, Philadelphia Weekly

“There’s affection for each of the people on screen no matter what their version of the tale. It’s too bad we can’t hear Diane’s take on things in her own words. Some mysteries can’t be solved.” – David Riedel, Santa Fe Reporter

“Polley ends up exploring universal truths in her bid to understand her background and origins. In watching her explore these areas of her life, we may come to strong, cathartic realizations about our own.” – Andrew Crump, Go See Talk

LOVE IS ALL YOU NEED

“The movie plods along enjoyably for 110 minutes. You kill time, staring at the vistas, waiting for the conclusion you always know is coming. It’s a nice vacation, but not one I’d want to pay $12 to take.” – Jake Mulligan, EDGE Boston

“I think we’ve just gotten to the point in cinema where violent head-bashings set to ironic songs are all that a certain crowd needs from their movies. They’ll get their money’s worth here.” – Jake Mulligan, Rushmore Kite Flying Society

“The actual acts of murder are extremely horrifying and disgusting. Not only do you see too much of the graphic gore, but there are loud gut-wrenching sound effects like cracking and crunching, which ruin the satirical tone of the movie.” – Evan Crean, Starpulse