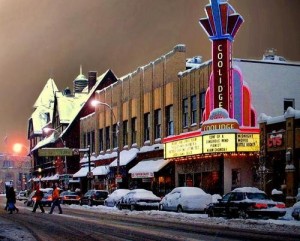 Midnight movies are a cinephile tradition that spans decades, and the Coolidge Corner Theatre is keeping it alive here in Boston. Their @fter Midnite series is one of the city’s best cinematic treasures; playing both classic and new-school cult movies (everything from contemporary shockers like BRONSON and OLDBOY to grindhouse classics like THE TEXAS CHAINSAW MASSACRE and SUSPIRIA) every Friday and Saturday night to rabid, adoring crowds.

The second part of our interview with programmers Jesse Hassinger and Mark Anastasio focuses on their midnight program, their dedication to keeping the midnight presentations exclusively 35mm, the films they have coming up in the next few months, and even their selections for this weekend. You may be skeptical, but trust us: there’s a lot of fun to be had in PSYCHO II.

Jake Mulligan: So there must be movies you guys want to show but can’t, because there aren’t prints available.

Jesse Hassinger: For the midnight stuff, now that there still are prints available, if there’s not a print available [of the specific film they want to play] then we really have to question whether to show it at all. It’s a rare occasion. Like a new-release midnight movie from IFC or Magnet, something like THE HUMAN CENTIPEDE, where they’re only making it available on Blu-ray, that is a different story. But talking about [vintage] genre films, that have prints somewhere out there, we will definitely play the print.

Mark Anastasio: BASKET CASE is one of those films that’s on the want list and there’s just no 35mm film available of it. People ask, “are you going to play BASKET CASE?” And it’s like, yeah we would…

JH: And should a Blu-ray of it ever get released, we probably will, but we don’t want to show a DVD…

JM: Right, who wants to come out at midnight and pay for something they can see out home. And I know a little while back you guys did a free showing of WOMEN’S PRISON MASSACRE after a cancellation, so at least you have an archive to pull things from in worst case scenarios.

MA: We don’t have a ton of films, but the films that we do have, strangely enough, are very rare, and they are 35mm genre films. It’s just like, we would never have an audience for them. 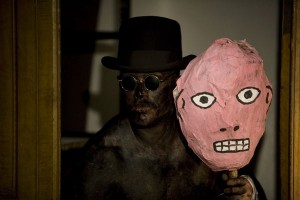 JH: Yeah, that [WOMENS PRISON MASSACRE] was an interesting test in my mind, I always wanted to do more European horror stuff, more European sleaze. Some Jean Rollin films, there’s a great film called POSSESSION that I want to play – it has a beautiful new 35mm print out there, but I don’t know if people would show up to see it – so that was like a test for that. We might try it some more.

JM: I remember when we talked around this time last year you said you wanted to move the midnight’s in a direction of a kind of month-by-month set of repertory series…

MA: Yeah, and we fluctuate. We started off wanting to do monthly themes, and a couple years ago we did theme months, and then we started to feel like we should get away from that. But the one we do every year is the Summer Camp stuff in June. Even though we’re kind of trying to stay away from theme months, we fall into it anyway.

MA: We’ve got PSYCHO II! It’s a series of worthwhile sequels. You see the title, and your first inkling is “well that must suck.” But they don’t!

JM: How is PSYCHO II?

MA: PSYCHO II is incredibly worthwhile. I mean, think, someone had the balls to do PSYCHO II. Someone said, “yeah, I’ll do a sequel to one of Hitchcock’s classic films.” And they got Anthony Perkins, and the woman in it is a total babe, and it actually gets you believing in Norman as like, a hero! I don’t want to give anything away, you know, but you watch the whole movie thinking “Who the hell is trying to fuck up Norman Bates’ parole? Someone is really trying to make it look like he’s an asshole again! Poor Norman!” 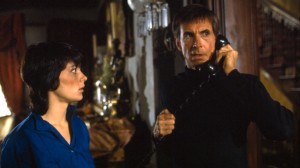 MA: Yeah, it’s great. He’s playing a short-order cook, and freaking out about things. “I just saw my dead mother!” And they still don’t think he did it! That one is fun. You’ve got to come to that one. But jumping back, yeah, we really haven’t tried a lot of the more traditionally grindhouse type stuff.

JM: Well the Halloween marathon always gives you a chance for that. Last year we got SUSPIRIA, DEMONS 2….

JH: That’s a time of year where we can have fun, and with some of the secret titles we can show things we wouldn’t ordinarily show by itself. We have a captive audience. And maybe they haven’t heard of it, but, say, two years ago we ran DON’T GO IN THE HOUSE [as one of the secret Halloween titles,] and I think 2 people would come out if we ran that individually over a weekend.

MA: It’s MANIAC with a flamethrower. And sleazier. It’s been two years since we played MANIAC, can we do that again?